The industry also grew strongly from 2016 to 2018 based on the overall impacts (i.e., including multiplier effects). Employment grew by 7.2% with incomes growing by 15.1%. Overall economic impacts grew 21.4% over this two-year period.

In order to give a sense of the impacts of the various sectors of the creative industry, the following tables shows the employment, income, and output impacts by sector within the creative industry. These are the direct impacts, so they do not include multiplier effects. As has been the case in the past, the sectors with the largest impacts are printing, advertising, and related activities; design and advertising; and performing arts. 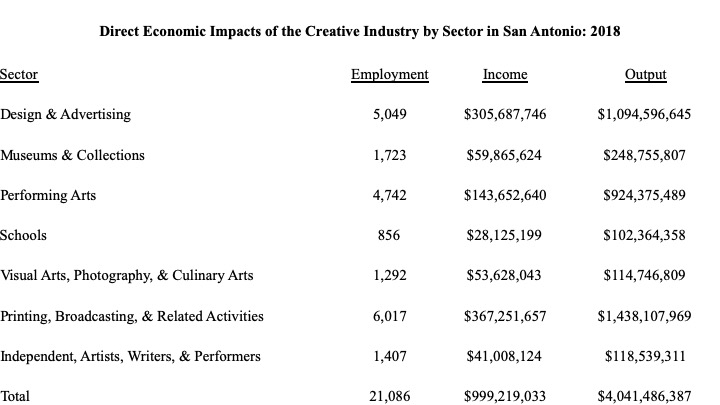 Lastly, we always take a brief look at the employment by creative occupation. The figures above are based on definitions by the NAICS industry codes, so the employment in the firms in these sectors includes all workers, regardless of whether or not they are engaged in creative work. However, the creative industry, or rather creative workers, play a somewhat unique role in the economy because they work in a variety of industries, including those that are defined as “creative.” Additionally, the firms in the creative industry support the growth of firms across all industries through the goods and services they provide. Looking at employment by creative occupation highlights these impacts in a very small way. This data indicate that there are 21,984 creative workers employed in all industries across the San Antonio economy.

Summary of the Methodology

The geography used in the analysis was the San Antonio metropolitan statistical area. The employment and income data were provided by EMSI. This is the same data source that has been used in the previous studies of this industry, and it is used because it includes measures of the non-QCEW and self-employed workers. Self-employed artists are a key component of the creative industry who would not be captured by using the data from the Quarterly Census of Employment and Wages (QCEW).

The conversion factors used to calculate the overall economic impacts were calculated using the sales and payroll data by industry from the 2012 Economic Census. The data from the 2017 Economic Census were not yet available at the time the analysis was conducted, which made it necessary to use the 2012 data.

In order to calculate the multiplier effects, the export data for each sector of the creative industry was pulled from the EMSI database and run through the IMPLAN input-output model.

In their article, “The Phantom of the Opera: Cultural Amenities, Human Capital, and Regional Economic Growth,” Falck, Fritsch, and Heblich show that the presence of baroque opera houses in Germany helps attract “high-human-capital employees” to these regions. Upon showing this existence of this effect, they extend their analysis to see if these high-human-capital workers will generate knowledge spillovers. They state that: “Answering this question is of practical relevance for local government because in the absence of positive spillovers, it is difficult to justify using taxpayers’ money to subsidize cultural amenities” (Falck, Fritsch, and Heblish, 2011, p. 761). Their finding that cultural amenities do lead to knowledge spillovers and increases in productivity and economic growth is very interesting and important. While I agree with their statement about this being a justification to subsidize the arts, I think their is a nuance here that also need to be mentioned.

Even if there was no knowledge spillovers as they found, there could still be justification for funding of the arts based on the enhancements to the quality of life it brings to the residents of the community. I just feel the need to mention this because I think economics puts too much emphasis on growth in productivity and GDP. It is often argued that if a policy does not increase productivity or GDP growth then it is just not worth pursuing. I understand that these effects are all interrelated in that cultural amenities help attract and retain labor because it enhances quality of life, which could then drive economic growth higher. But, what if the cultural amenities just enhanced the quality of life of those living in the community without boosting economic growth? Could that value not be enough to justify subsidizing the arts? I argue that it could.

Many people, including myself, have argued that it is important to include an enhanced focus (or even a focus at all) on the arts within a curriculum that is focused on science, technology, engineering, and math (STEM). In other words, the focus on STEM should be expanded to be STEAM. Even with these arguments being made, there has been a relatively recent movement to minimize the importance of a liberal arts education across some states. For example, the governors of both Kentucky and North Carolina have made such proposals.

I think this is a grave mistake. To be upfront, I received my bachelor’s degree from a small liberal arts college, and I am currently an associate professor of economics at a liberal arts university. Thus, I admittedly may be biased. But based on my experience, I know that my liberal arts education allowed me to achieve a deeper understanding and view problems from different perspectives. And in my work with artists on various projects and through my teaching of arts students, I know that they see the world from a different perspective that allows them to approach problems from varied angles.

I think J. Bradford Hipps discusses this very eloquently in his New York Times article, “To Write Software, Read Novels,” published in the May 22 paper edition (published May 21 online under the title “To Write Better Code, Read Virginia Woolf“). In the article, he provides examples where liberal arts graduates working within technology companies applied their abilities to “see” things differently to solve problems that the “techies” were finding to be intractable.

This is not arts for arts sake. This is arts for the economy’s sake.

I am confident that if we continue down this path of gutting liberal arts education from Pre-kindergarten through university, our economy is going to suffer because we will severely diminish the productive abilities of our labor force.

Alan Shipnuck recently wrote a fascinating article about Bryson DeChambeau, one of the world’s best amateur golfers, who will soon be taking the PGA Tour by storm.  In my opinion, the article is fascinating for several reasons, but one quote in the article from Mr. DeChambeau really stood out to me.

“‘…Playing is not about swing theory. When you’re on the course, you have to be an artist.’ DeChambeau can sign his name left-handed, in cursive, upside down. On his bedroom wall is a stippling drawing of his hero, Ben Hogan, that took him four months to create. In 2015 he finally brought this same artistic flair between the ropes, winning the NCAA Championship and the U.S. Amateur. Only four other players can claim this double-dip in the same year: Jack Nicklaus, Phil Mickelson, Tiger Woods, and Ryan Moore.”

I have long argued that it is very important to have the arts as a core part of the educational curriculum at all levels because even if the person is not going to become an artist, the arts teaches us to “see” things differently. It trains us to approach problems and issues from a different perspective. That is why this part of the article stood out to me. Bryson took a very scientific approach to building his swing and his golf clubs. He majored in physics while at SMU and probably understands the physics and mechanics of the golf swing as well as anyone, but it was not until he realized to be an “artist” on the course did he attain the highest levels of amateur golf.  He is now poised for a very successful pro career. Golf constantly presents you with new challenges on the course that you have to address very quickly, so being able to see different ways to address these challenges through the different shots one can make is very important. In other words, art is great training for even some of the top athletes in the world.

I recently presented the updated economic impact of the creative industry in San Antonio at the Tobin Center. The measured impacts are for 2014. The presentation can be found here, but in brief the industry has shown steady increases across all measures from 2012 through 2014. As of 2014, the industry, employs 21,736 people who earn over $1 billion in wages. The total estimated output of the industry in 2014 was $4.3 billion. These numbers do not include any multiplier effects. This industry, maybe more than any other industry, registers an impact far beyond its standard economic impacts as previously mentioned because of  its “artistic dividend.” This is a concept coined by Ann Markusen and David King to capture the productivity enhancements and economic growth that would not occur were it not for the presence of artists and other creative workers in the area. So, besides the rather large impact the industry directly has on employment, income, and output, it is a very important industry to the development of San Antonio’s economy because of the productivity improvements it provides to every other industry.

The U.S. Bureau of Economic Analysis (BEA) recently released new data on arts and cultural production for 2012. While there is a lag in the release of the data, it is exciting that they are providing such data in collaboration with the National Endowment for the Arts.

According to the BEA: “Nominal value added from all arts and cultural production (ACP) industries – a measure of this sector’s contribution to gross domestic product – increased 3.8 percent, or $25.8 billion in 2012, according to new statistics released by the Bureau of Economic Analysis (BEA). Value added accounted for 4.3 percent, or $698.7 billion, of GDP.” (Source: http://bea.gov/newsreleases/general/acpsa/acpsa0115.pdf)

Of the core arts and cultural production industries, the top five by value added (contribution to GDP) were:

I recently went with my wife and one of my daughters to see the Intimate Impressionism exhibit at the McNay Art Museum in San Antonio. It was a fascinating exhibit, and I was in awe by many of the paintings. My favorites, in no particular order, were:

The one that made me say, “Wow” upon first seeing it was Renoir’s “Picking Flowers”, so it has to be considered my top pick on the list. 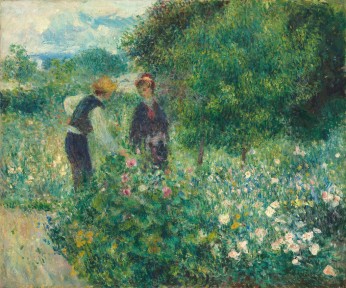 Almost as fun and fascinating as seeing the art was overhearing the various conversations people were having about the paintings. They ranged from, “Those oysters sure look tasty”, to rather in-depth discussions about what the artist was actually trying to portray or might be thinking at the time. It was a clear example of the role the arts and museums on the economy. From the looks of bumper stickers on some of the cars, it appeared that the exhibit did attract visitors from Austin and other areas outside San Antonio, but the more profound impacts, in my opinion, are the enhanced quality of life and the creative inspiration it provided many of those who saw the exhibit. While the ability of an art exhibit to attract visitors to the area is important, It is the impacts to quality of life and the inspiration they provide that attract the skilled, creative workers in all industries to a region, and it is exactly why the arts are so important to the continued development of a regional economy. 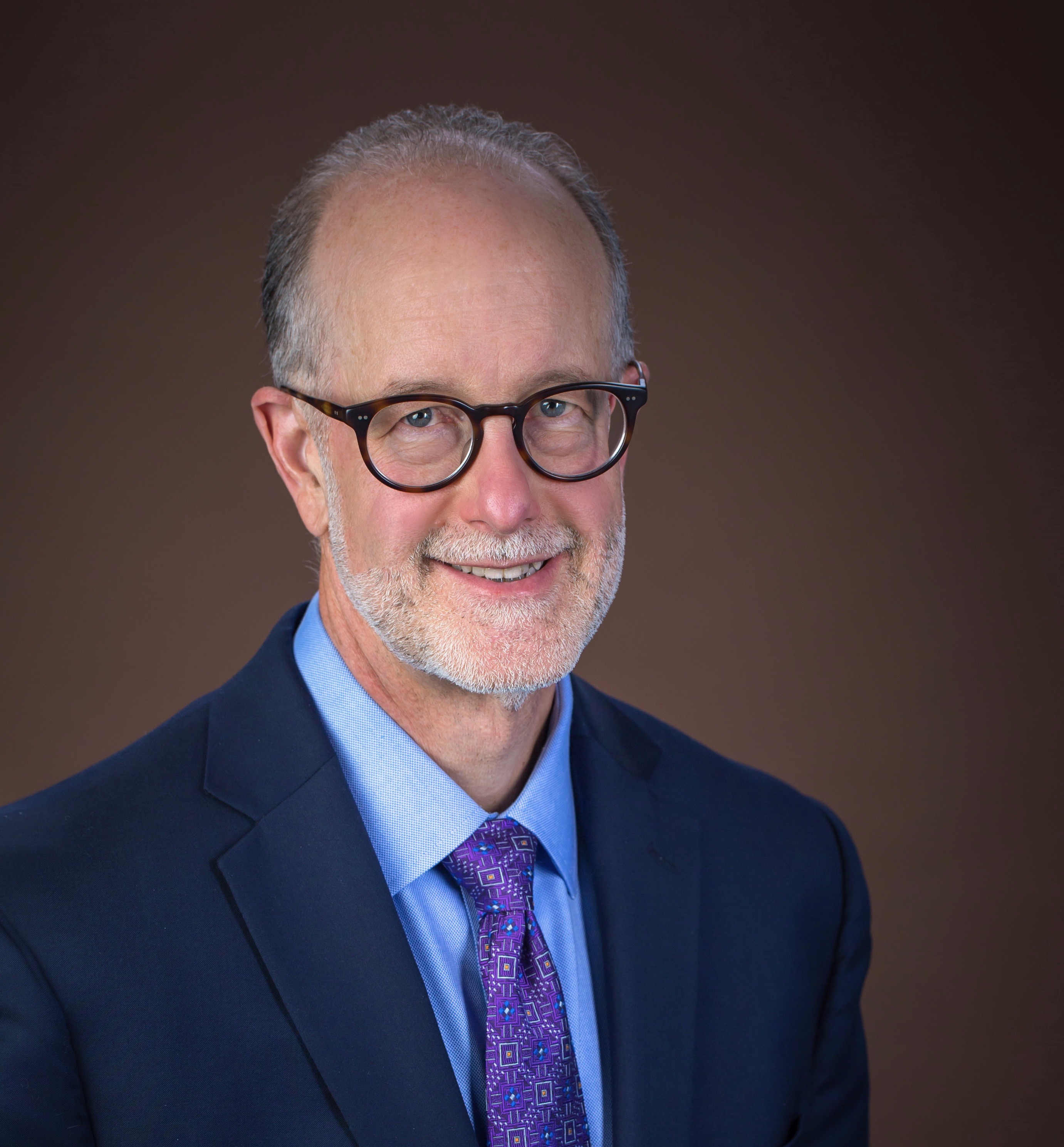